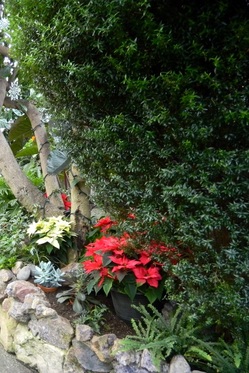 Imagine an innocuous-seeming shrub whose leaves, flowers, and berries possess flavours so vexing it has inspired dramatic myths, complete with spite-spurred murders and punitive transformations.

Look no further than Myrtus communis, or common myrtle – a plant that has leapt out of the world of myth into our conservatory. Associated with love, fertility, and immortality, myrtle has long held a role in weddings and funerals.

An evergreen shrub native to the Mediterranean, myrtle has small, ovate, dark green leaves that give off a eucalyptus-like scent when crushed. Myrtle's white or pale pink, five-petaled flowers give rise to dark blue berries, which are dried and used as a pepper substitute. As a spice, it's bitter, complex, slightly mentholic. Though its popularity has fallen worldwide, in the Mediterranean it is still used to flavour meat, notably, mortadella sausage, an Italian delicacy which is widely enjoyed.

Myrtle was revered for its medicinal properties in several traditions, and was spoken of highly by Hippocrates and others across Eurasia. It continues to be used today in some folk medicines.

In France, water infused with myrtle leaves, eau d'ange (angel water), is used as a personal scent. Greek and Roman brides would bathe in myrtle-scented water, and a sprig has been included in the bride's bouquet in British royal weddings since Princess Victoria's in 1858. In Judaism, myrtle is one of the four sacred plants of Sukkot, the Feast of Tabernacles. The Hebrew word for myrtle, Hassadah, is another name for Esther, and the plant is associated with that queen's good qualities. Myrtle was included in the groom's wreath in Jewish weddings, and continues to be used in wreaths in Ukranian Catholic weddings.

As an ornamental shrub, its beauty is unrivaled: its foliage is glossy and dense, and can be trained to take a desired shape. It grows wild in the warm, dry parts of southern Europe and western Asia. You won’t see myrtle in local gardens, though, as it can’t tolerate Thunder Bay’s cold winters - so be sure to visit it at the Conservatory! 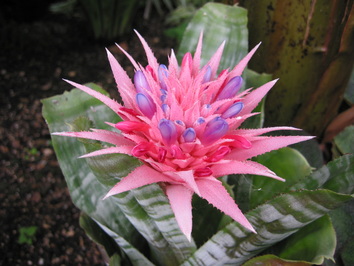 Photo cc Paul & Aline Burland
dream of jungles: air you half-inhale, half-drink; heat that’s an embrace from above; colours normally seen in dreams. If, like me, you yearn for the tropics but are rooted in northern Ontario, take heart! Some brave soul has brought back an award-winning bromeliad for us to revel in at the Thunder Bay Conservatory. Aechmea fasciata, a Brazilian urn plant, awaits your amazement.

Bromeliacea, the pineapple family, offers an ecological wonder of an epiphyte. First, the word ‘epiphyte’ (Gr.: epi – ‘upon’; phyton – ‘plant’) describes an unrooted plant who makes another plant its home. Roots exist to anchor an epiphyte to its host, but the plant is nourished via trichomes, tiny root-like hairs that emerge from the leaves. Trees in rainforests, especially cloud forests, are crawling with epiphytes in their sundry shapes and adaptations. Rather than take nutrients from soil or from a host tree, epiphytes have developed unique means of getting their needs met. For Aechmea fasciata, the secret is in the urn.

The rosette of an urn plant grows tightly around its tree host, forming a water-tight vessel. The urn (or tank) holds a pool of water that becomes a miniature pond, catching fallen foliage from the canopy and attracting organisms. Insects, amphibians and microbes thrive in this tiny ecosystem, amplifying biodiversity in the flower’s environment. The urn plant, native to neotropics of the Americas, survives sporadic rainfall by drawing water from its reservoir. Its leaves are large with horizontal silver stripes – another common name is the silver vase plant. Brilliant pink bracts give the plant its scientific name (Gr.: aichme- ‘spear’) as well as its striking appearance. Small, violet blossoms punctuate the pink just once in an urn plant’s lifetime, after about five years’ growth.

If it’s love at first site, an enthusiast can cultivate urn plants at home. A beginner’s bromeliad, urn plants do well indoors in pots. Care must be taken to ensure there is always water in the reservoir, and higher humidity is better. While the leaves should be misted regularly, roots need not be watered. Although leaves will begin to wither and die following blossoming, it’s not difficult to propagate a new plant from the offsets or pups which surround the mother.

What's Blooming at the Conservatory