​Statement From the Board of Directors of the Friends of the Thunder Bay Conservatory, June 08, 2021


It has been repeatedly demonstrated through public consultations that investment in the Conservatory complex is supported by the people of Thunder Bay.

Investment in renewal of the Botanical Conservatory display area, including the two end wings, will result in considerable operational and energy savings, reduced greenhouse gas emissions, improved accessibility, additional opportunities for the public, growing attendance numbers and increased interest from the tourist sector.

The positive effects of green space on improved mental health and stress reduction have been well documented and are increasingly important as we cope with the ongoing fallout of COVID-19. People of all ages, abilities and socioeconomic backgrounds find respite and solace among the tropical greenery, even in the depths of our long northern winters.

We are so grateful for all the planning and work already done towards renewal of the facility and we are committed to supporting Council’s continued efforts to revitalize the Centennial Botanical Conservatory complex.

Sincerely,
The Board of Directors of the Friends of the Thunder Bay Conservatory

Final Statement in Favor of 2021 Budget

The final budget meeting might be coming up to decide whether the Conservatory will get a much needed injection of cash, but we have already been busy planning a statement to Council. The following is our June 2021 Deputation.
​June 2021 Deputation

Despite the continued lockdown COVID-19 has brought to the Conservatory, here at the Friends organization we have still been busy advocating for it. As such, the following document is the deputation provided to the City of Thunder Bay in February of 2021.
Friends of the Thunder Bay Conservatory
Deputation to City Council February 2021

The Motion has Passed!

Once again, the Friends were hard at work creating a Deputation to bring towards Council advocating for the Botanical Conservatory. Presented on September 24, the attached document was the result of our efforts.

Demonstration Garden Back Up and Running

In response to the Phase one report of the Grant Thornton City Program and Services Review, the Botanical Conservatory was recommended for closure during the 2020 Budget meetings held by the City of Thunder Bay. As a result, the Friends of the Thunder Bay Conservatory took the time to submit a 2020 Deputation, and at the February, 3 meeting it was presented to city counselors.

Please refer to the attached deputation to see in full the many reasons we have advocated, and continue to advocate, for the continued operation of the Botanical Conservatory. You can also read our Top 10 Reasons to Visit here.

December at the Conservatory

Representatives of the Friends of the Thunder Bay Conservatory attended a workshop with City staff and other stakeholders March 30, 2017, to discuss ideas for the future design build of the Conservatory and the growing greenhouses. Others in attendance included representatives from the Master Gardeners, EcoSuperior, Conservatory staff, CEDC and Roots to Harvest.

A drop-in Open House was held on May 10, 2017, at the DaVinci Centre, for the public to learn more and share views with City staff.

From the City of Thunder Bay webpage:
The Conservatory has been an important part of our City for the last 50 years. In the future, the City must replace the Conservatory buildings. This is an opportunity to investigate if there are other uses that should be incorporated into the space. Stay tuned for future public engagement sessions and information regarding future use and construction plans.

The Friends of the Thunder Bay Conservatory made a presentation to City Council November 1, 2017.

An investment of $100,000 will enable the City of Thunder Bay to improve and expand the Centennial Botanical Conservatory. Opened in 1967, the Conservatory features exotic flowers, trees, shrubs and plants from around the world, and is a popular local attraction for schools, seniors, cultural groups, and wedding parties. The 50-year old facility is in need of structural repairs and FedNor’s funding will help with renovations, as well the widening of pathways to accommodate people with disabilities or mobility challenges.

Don Rusnak, Member of Parliament for Thunder Bay-Rainy River, on behalf of the Honourable Navdeep ​Bains, Minister of Innovation, Science and Economic Development, made the announcement Friday, May 26, 2017​ at the Conservatory. The FedNor funding was provided through the Canada 150 Community Infrastructure Program (CIP 150) which is part of the Government of Canada’s coordinated approach to mark the 150th anniversary of Confederation. 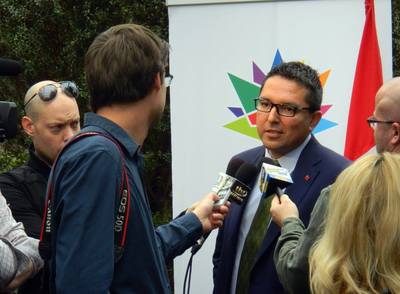 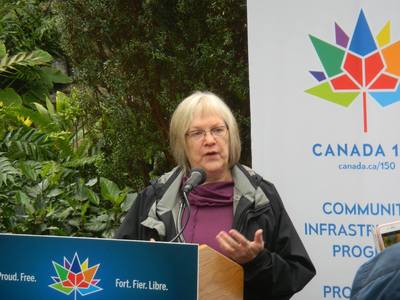 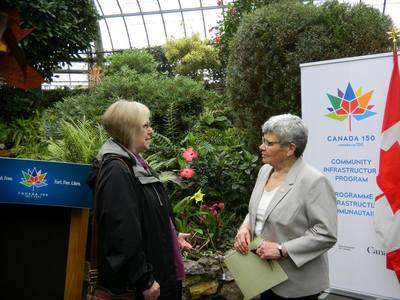 Letter from Kathleen Ott, Past Chair 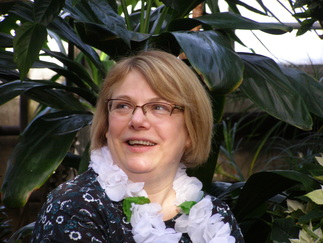 Photo courtesy of Monika McNabb
It is with mixed emotions that I announce my resignation as Chairperson for the Friends of the Thunder Bay Conservatory. Over the past three years, the executive of the Friends group has made tremendous efforts to bring the Centennial Botanical Conservatory back to relevance, and I am extremely proud of whatever influence we may have had in making those changes a reality.

After three years, it is time to hand the reins over – my husband Werner and I will be relocating to Vernon BC - but I will continue, even from afar, to stand as Past Chair and to assist the incoming Co-Chairs, Sharon & Kevin Sidlar, in whatever way possible. The group will be in great hands under their leadership and I ask that all members continue to offer their support to Sharon and Kevin.

I want to thank the Executive members of the group for having the faith in me to allow me to represent them the past few years. Thanks to Mike Dixon, Karen Nadeau, Barb Edwards and the Conservatory staff for welcoming the Friends group - I consider myself blessed to have developed a great friendship with each of you. We can be proud of the positive and unique relationship we forged in the benefit of the Conservatory. 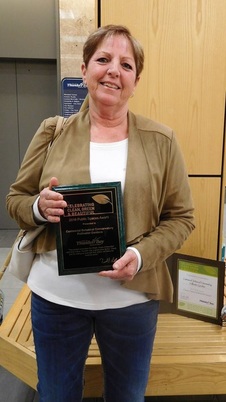 The project includes the installation of four Pollinator Gardens with interpretive signage across the City including Hillcrest Park, Vickers Park, the International Friendship Gardens, and the Centennial Botanical Conservatory. The project also includes Honey Bee colonies at the Conservatory.

Bees are an essential part of our ecosystem and critical in pollinating fruits and vegetables. One third of the food we eat would be unavailable without bees. As honeybees face increasing threats from parasites, disease and pesticide use, safe bee-friendly spaces become ever more important for their survival.

Since the summer of 2014, visitors have been able to view functioning beehives set up on the west side of the Conservatory grounds. These hives contain young colonies just getting started and were placed by beekeepers Rudy and Lois Kuchta, members of the Thunder Bay Beekeepers Association. 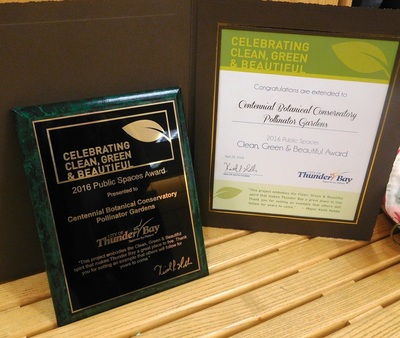 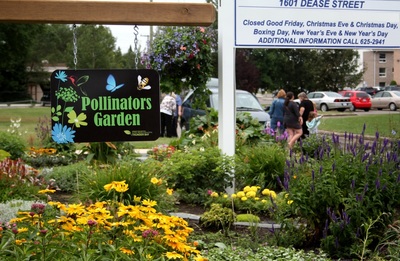 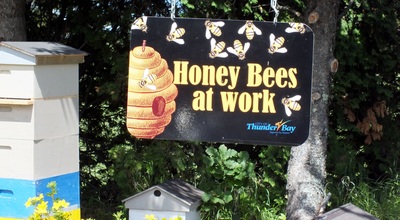 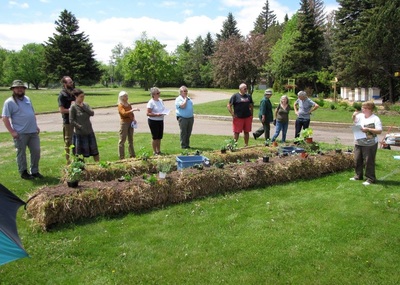